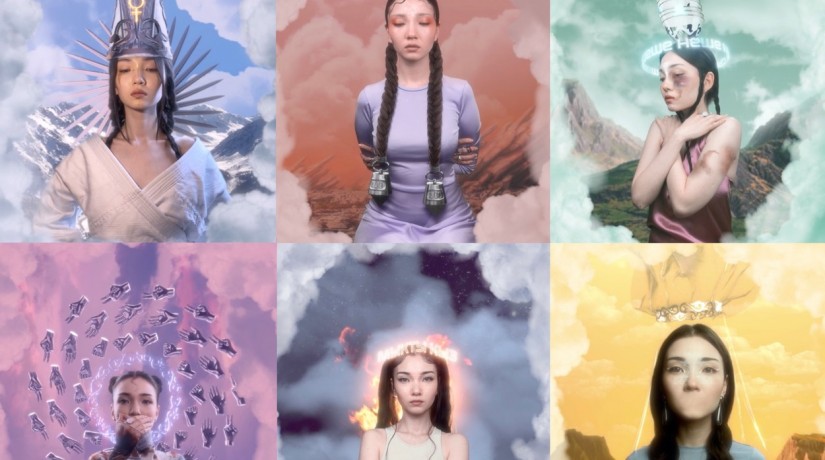 Almaty. August 21. Information Center - For a nation mired in antiquated traditions and systemic oppression, art like this should be a wake-up call, i-d.vice.com reports.

When Aya Shalkar made the decision to tackle women’s rights in Kazakhstan with her latest project, there was no such thing as COVID-19. At the time, Aya’s plan was to create a physical exhibition which would inspire conversation about the country’s very real gender-inequality issues and empower women affected by the culture of violence and oppression to speak up and be heard.

Then, in the midst of her planning, Aya along with the rest of the world was forced into quarantine and had to rethink the project and how she might communicate her message via a digital platform instead. Achieved via a steep learning curve, including figuring out how to work remotely with her collaborators, the result is a series of augmented reality videos featuring Aya herself, which are both beautiful and powerful; weirdly futuristic but also steeped in history.

With her audience of almost 800,000 Instagram followers, this is important. Domestic violence was partially decriminalised by the Kazakh government in 2017, and the statistics in the country paint a bleak picture, with hundreds of women killed each year by partners, relatively soft penalties for those convicted, and little recourse for women trapped in dangerous situations, particularly during lockdown. We spoke to Aya to find out more about her project and her hope’s for Kazakhstan’s future.

How was your own experience growing up in Kazakhstan?
I was born in Almaty, a larger, southern city in Kazakhstan. I grew up in an ordinary, yet progressive family, spent my early childhood in the suburbs and went to a traditional Kazakh school. Kazakhstan as a country is a flux between indigenous Turkic heritage and Soviet socialism, shocked by the quick shift to democratic capitalism after the collapse of the USSR. The result is something quite unique in terms of a social landscape.

How would you describe the art you tend to make?
I’m a graphic designer, which has a big impact on how I see and make art. I tend to think of each project as an independent universe with its own concept, message, audience and branding. But maybe this will change! One thing’s for sure, I will keep my futuristic approach as it’s truly a passion of mine.

Can you talk us through the thinking behind your latest project?
The idea to create AIEL — which is the Kazakh word for ‘woman’ — came to me about a year ago. I’ve always had a strong connection to my roots and culture but it’s no secret that Kazakhstan’s society is quite conservative in terms of a woman’s place within it. I’ve felt its effects over my whole life, especially since I started expressing myself on the internet. What is interesting to me is that the oppression of women often ends up being disguised as tradition. So I decided to put it all into my art. My goal was to spark forbidden conversations while trying to empower all the girls who will see the videos, by making them question the dogma that’s being pushed upon them by society. And I think it’s worked!

The series was made during quarantine. Do you think this had a bearing on the work itself?
When the pandemic started, I was in despair for a couple weeks before I came up with the idea of a video campaign format. As for the production, it was challenging, but fun. I built an improvised green screen studio at my apartment here in Vienna after ordering all of the equipment online. I shot the performances by myself, on my iPhone camera and since both the VFX team and sound designer are based in Kazakhstan, I can call AIEL a fully contactless project. The pandemic has made us see digital art from a new perspective and I think it’s very exciting. Many artists moved their creations into the digital world, and sometimes it’s not only safer, but also entirely new and refreshing to see and experience. The art world is changing and I love it.

What's been the reaction to the series?
The reaction to the project is mostly positive, with many young girls and women expressing their gratitude for speaking up for them and exposing the hard truth. But there has also been some backlash, mostly from men and even some women who believe AIEL insults Kazakh traditions, which could potentially lead to a loss of national identity. They refuse to understand that not all traditions need to be continued, especially if they put someone’s basic rights at stake. I believe we must constantly question the old ways and their relevance to our times. And if that means giving up some of them, we should not hesitate to put them onto the history shelf. There are many other beautiful traditions that can still be practiced, and surely enough of them to preserve our culture. Also, the stigma around feminism as a movement is very strong in the country. You’ll often hear, “I am not a feminist, but…” and women are often misunderstood and misinterpreted if they call themselves feminists. The whole image of the movement is distorted and perceived as rather radical and belonging-to-the-West. I believe things will change but it will take time.

What are you working on next?
I can’t say right now but it will come out very soon! My bigger career goal is to pass on the excitement I feel every time an idea hits me out of nowhere. It’s the best feeling in the world and I would love to share and spread it to as many enthusiasts as I can, especially in my home country. I want people to look at my art and get excited about the possibilities the future holds. To get out of the ordinary, at least for a little.