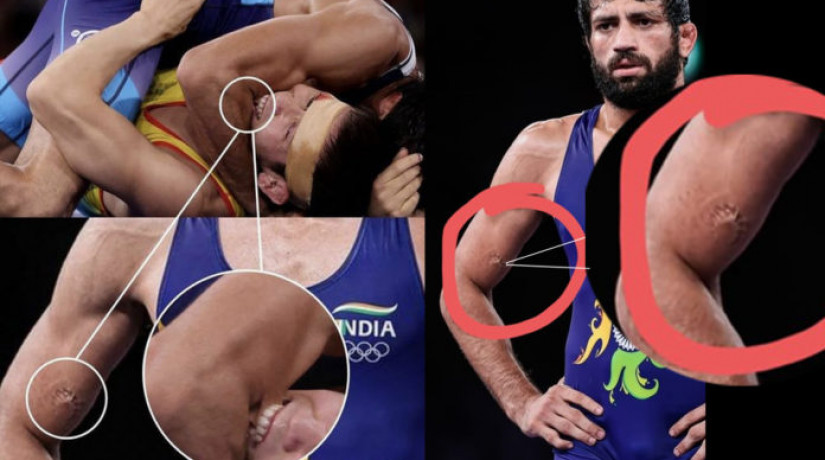 Almaty. August 10. Information Center - Silver-medalist Ravi Dahiya on getting bit by Kazakh wrestler,’ He hugged me and said sorry brother’: India’s Ravi Dahiya endured a painful bite on his biceps from opponent Nurislam Sanayev during the Tokyo Olympics semifinal. After Ravi Dahiya scripted one of the greatest comebacks on the mat, the pictures revealed the deep bite mark on his right bicep, Inside Sport reports.

According to the rules framed by the world governing body UWW, the chapter Prohibition and Illegal Hold article 48 states that wrestlers are forbidden to pull the hair, ears, genitals, pinch the skin, bite, twist fingers or toes of their opponents.

The wrestlers are barred from performing actions, gestures, or holds with the intention of torturing the opponent or making him suffer to force him to withdraw. And if found guilty, the wrestlers can be penalized.

After the incident, when Ravi came for the weigh-in, Sanayev was already there He approached Ravi and apologized.

“When I came for the weigh-in the next day, Sanayev was already there. He came and shook hands with me. I greeted him too because I had already forgotten everything. He hugged me and said – ‘sorry brother’. I smiled and hugged him back. We are friends. We also shared a few laughs on other topics,” the Olympic medallist said.