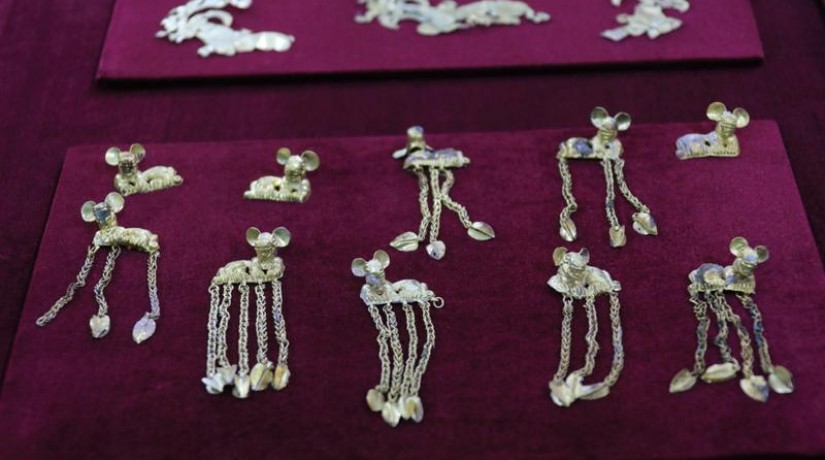 Archaeologists assumed that the found artifacts are fragments of one set of ceremonial horse harness. In their assessment, the treasure belongs to the Middle Saka period of the 5-4th centuries BC. “The treasure was not found in the mound itself. This indicates that the chief’s grave was a place of worship. People have been coming to this sacred place and leaving offerings to the spirits of their ancestors for a long time after the death of the chief. The Saka-Scythians and later Turkic tribes had such a custom. In this regard, we are confident that the ruler was buried here,” said an archaeologist, Professor Abdesh Toleubayev. Archaeological work was carried out by scientists of the Al-Farabi Kazakh National University. The findings indicate that the Saka-Scythian society was clearly divided into both very rich and very poor representatives. Archaeologists paid special attention to another rare artifact that had not been discovered before – pendants in the form of a mythological eared predatory cat. Scientists were also interested in a chain made of double gold wire with two pendants and carnelian stones at the ends. “We can say for sure that the ancient masters did not copy each other. Each master had his or her own style. All the findings are very elegant and made with great care. Most other horse ornaments were made from thin foil. Here decorations are made of dense gold leaf, the foil is also thicker. I have never met such rich, dense ornaments for horse equipment,” the scientist added. The head of the excavation Abdesh Toleubayev noted that a bronze and gold foundry was found 50 meters from the mound. He said that the finds are just the beginning. After all, archaeologists have plenty of work. They will start studying four small mounds soon.