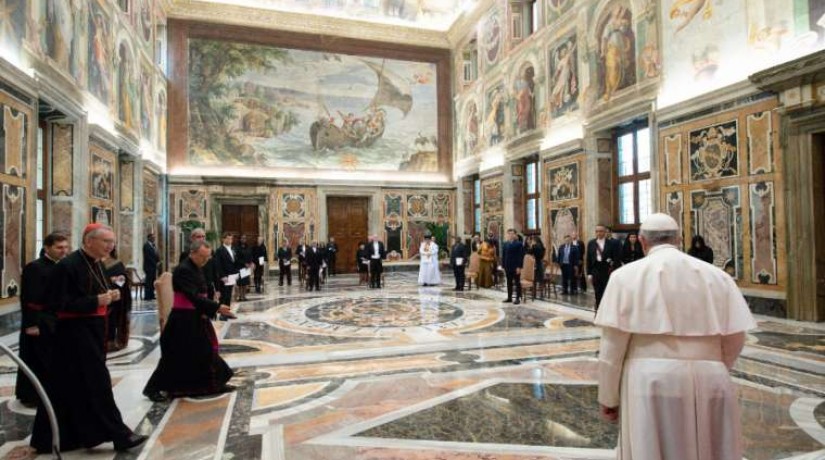 Almaty. December 10. Information Center - The ambassador of Kazakhstan to the Holy See has said that there are “high hopes” that Pope Francis will visit the central Asian country next year, if the coronavirus situation permits, Catholic News Agency.

In an interview with EWTN Dec. 4, Alibek Bakayev said that Kazakhstan was planning to host the seventh edition of the Congress of Leaders of World and Traditional Religions in June 2021, and he expected that Pope Francis would attend the event.

The Vatican announced Monday that Pope Francis will travel to Iraq on March 5-8, 2021, becoming the first pope to visit the war-torn country. It will be first international papal trip in more than a year due to the pandemic.

“We have high hopes that on the pope’s agenda there will be an opportunity to visit Kazakhstan,” Bakayev said.

“It will be a historic visit,” the ambassador noted. “Moreover, it will mark the 20th anniversary after the first visit [of a pope].”

“I hope that within the framework of the pope’s visit, we will be able to sign a number of different bilateral documents, in particular, at least, the Memorandum of Understanding and Cooperation in the fields that I called for: in science, education, medicine,” he said.

The first pope to travel to Kazakhstan was St. Pope John Paul II, who visited the country, together with Armenia, in September 2001. At 81 years old, and suffering from Parkinson’s disease, John Paul II spent four days in the central Asian country amid heightened security concerns following the September 11 terrorist attacks.

Asia News reported last year that Pope Francis and the Russian Orthodox leader Patriarch Kirill of Moscow could meet in Nur-Sultan, the capital of Kazakhstan, in 2021.

Bakayev said that a papal visit would be “a special event not only for the Catholics of Kazakhstan, but also for the entire central Asia region.”

“I think that there will be more [central Asians] and those who want to come and see the pope. That is why we hope that the coronavirus will not prevent us from implementing such big plans for the coming year,” he said.

In Kazakhstan, there are five Catholic dioceses and approximately 250,000 Latin Rite Catholics, according to 2008 statistics, making up a just small minority of its population of 18.28 million.

Ethnic Kazakhs are predominately Sunni Muslim, the most commonly practiced religion in the country. According to a 2009 national census, the second most practiced religion is Russian Orthodox Christianity, at more than 20%. The central Asian country is also home to many immigrants.

Last year, Pope Francis erected an apostolic administration for Byzantine Catholics in Karaganda, Kazakhstan, highlighting the growing number of Ukrainian Greek Catholics in the country, which some estimates state to be around10,000 innumber.

The Holy See established diplomatic relations with the Republic of Kazakhstan in October 1992, just 10 months after its founding in December 1991.

Kazakhstan is the world’s largest landlocked country, at 1,052,100 square miles. But with a population of around 18.3 million, it has one of the lowest population densities. The country shares borders with Russia, China, Kyrgyzstan, Uzbekistan, and Turkmenistan and adjoins part of the Caspian Sea.

Bakayev, Kazakhstan’s ambassador to the Holy See, was received by Pope Francis at the Vatican Dec. 4 to present his letter of credentials.

Pope Francis addressed Bakayev and nine other new ambassadors, saying it was his hope “that your diplomatic activity as representatives of your nations to the Holy See will foster the ‘culture of encounter’ needed to transcend the differences and divisions that so often stand in the way of realizing the high ideals and goals proposed by the international community.”

He added: “Each of us is invited, in fact, to work daily for the building of an ever more just, fraternal and united world.”