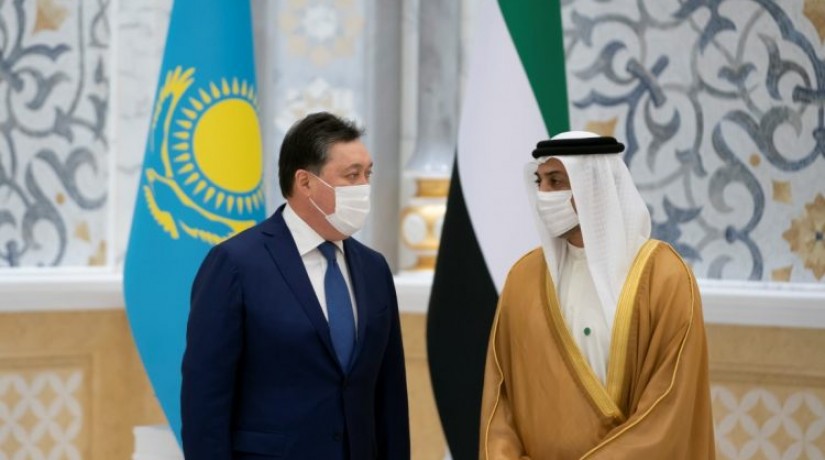 Almaty. October 20. Information Center - The United Arab Emirates and Kazakhstan have signed an agreement worth $6.1 billion during Kazakh Prime Minister Askar Mamin’s two-day visit to Abu Dhabi last week, under which the two countries will implement more than 20 projects across a wide range of economic sectors, Caspian News reports.

As a part of visit, Mamin met with Sheikh Mansour bin Zayed Al Nahyan, Deputy Prime Minister of the United Arab Emirates and Minister for Presidential Affairs, to discuss how to develop deeper commercial ties between the two nations.

According to a statement issued by the Kazakh government, the document was signed immediately after the sides have discussed expanding collaboration in trade, transport, logistics, agribusiness, construction, petrochemistry, space and tourism. Kazakhstan has offered the UAE a series of projects, including those providing for the creation of new industries with high added value and great demand potential both in the local and foreign markets.

Officials in Nur-Sultan voiced their confidence that the implementation of these initiatives would create new jobs in Kazakhstan, as well as introduce advanced technologies and practices in Kazakhstan.

Meanwhile, most of the projects to be jointly implemented by the two countries are focused on agribusiness.

“The Republic of Kazakhstan and the UAE pay special attention to implementing the potential of cooperation in the agro-industrial sector – 10 out of 21 planned projects envisage the launch of food production with high added value,” reads the statement published to the website of the Kazakh prime minister.

“This will allow Kazakhstan to become an important link in the Food Security Strategy implemented by the UAE until 2051 and will further increase trade between the two countries.”

The UAE's direct investments in Kazakhstan over the past years amounted to more than $2 billion, according to government data. Investments were made to more than 350 different companies, branches and representative offices. At the same time, the amount of trade between the two countries reached $500 million in the first ten months of 2019, according to government data.

The UAE has also been involved in finances-related activities in Kazakhstan within the Astana International Financial Center (AIFC).

Launched in 2018, AIFC is like financial centers in Singapore and Dubai following British securities and corporate law, and offering visa and tax waivers to global financial investors. Members of AIFC are exempt from Kazakh corporate income tax, individual income tax, land tax and property tax for 50 years. In 2018, AIFC’s management announced intent to issue sukuk, or Islamic bonds, for investment, infrastructure and environmental projects. Unlike traditional bonds, sukuk does not imply a fixed income, since Sharia prohibits interest. These activities are aimed at the development of Islamic finance in a country where Muslims make up over 70 percent of the population.

Furthermore, the UAE was engaged in the development of Kazakhstan’s first polypropylene plant in the Atyrau region, which is positioned in the west of the country.

In 2018, Kazakhstan’s state-owned United Chemical Company and Austrian Borealis agreed for the joint development of a world-scale polyethylene project, integrated with an ethane cracker. Borealis is jointly owned by the UAE's Mubadala Investment Company and OMV, an integrated international oil and gas company based in Austria.

Borealis, however, has announced this May its decision to not further pursue the development of the $2.6 billion integrated cracker and polyethylene project due to the coronavirus pandemic.

“The decision to discontinue this project is based on a thorough assessment of all aspects of the prospective venture and impacted by the effects of the COVID-19 pandemic as well as the increased uncertainty of future market assumptions,” reads the statement published to the company’s website.

Meanwhile, the plant is expected to come online in the third quarter of 2021, according to the project operator Kazakhstan Petrochemical Industries Inc.