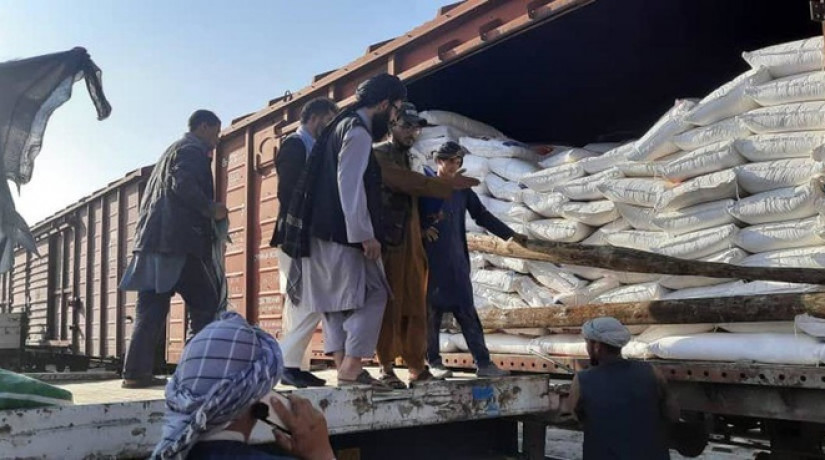 Almaty. October 20. Information Center - Since October 15 2021 sixty eight railway carriages with the cargo have arrived from Kazakhstan to the freight terminal of Hairatan, Balkh province of Afghanistan, AKI PRESS reports.

At present, the aid delivery is being unloaded and stored at the temporary storage warehouses of the Balkh province, where the terminal is located, Kazakh Foreign Ministry said,

Local authorities plan to distribute Kazakhstani flour among vulnerable groups of the population. Traditionally, Kazakh agricultural products are used by the northern Afghan provinces of Balkh, Baghlan, Takhar and Kunduz, as well as the city of Kabul.

The delivery of the most recent humanitarian aid to Afghanistan was confirmed during a working visit of Erzhan Kazykhan, the Special Representative of the President of Kazakhstan, to Kabul on 17 October 2021, during which he met with the representatives of the interim government of Afghanistan Abdul Ghani Baradar and Amir Khan Muttaqi. The Afghan side expressed their gratitude for the humanitarian assistance provided and noted the significant contribution of Kazakhstan to international efforts to rebuild Afghanistan.

In addition, the Kazakh Government proposed to provide its domestically-developed QazVac vaccine against COVID-19 to Afghanistan.

Earlier Kazakhstan also provided humanitarian assistance to Afghanistan. In 2020, as part of efforts to combat the socio-economic consequences of the COVID-19 pandemic, 1,900 tonnes of flour, 4,000 litres of vegetable oil, 200,000 cans of condensed milk, and 5,000 tonnes of pasta were sent, as well as winter tents, sleeping bags, beds, mattresses, blankets and warm clothes, which were distributed among the population of a number of eastern provinces of Afghanistan, affected by large-scale floods in the country.

Kazakhstan has long been committed to contributing to prevention of a major humanitarian crisis in Afghanistan. As such, Kazakhstan has in the past provided significant support to Afghanistan, including a $50 million scholarship program to educate 1,000 Afghan students. Kazakhstan hosts many Afghans, including young women and girls, who pursue higher education studies.

During the visit to Kabul, Erzhan Kazykhan also met with the UN agencies in Afghanistan, including Mrs. Deborah Lyons, the Special Representative of the UN Secretary General for Afghanistan, and Head of the UN Assistance Mission in Afghanistan (UNAMA). They discussed issues of expanding cooperation between Kazakhstan and the UN in overcoming the humanitarian and food crisis in Afghanistan.

Since August 2021, the interim office of UNAMA and other UN agencies accredited in Afghanistan, temporarily relocated to Almaty, following a request to Kazakhstan by the United Nations. On September 20, the UN approved a proposal by the President of Kazakhstan, Kassym-Jomart Tokayev, to create a hub in Almaty to help the Afghan people and to consider redeployment of UNAMA to Almaty.