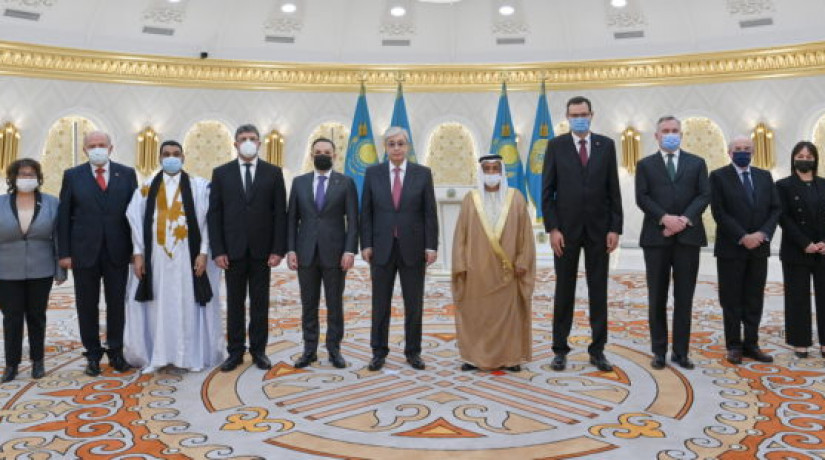 Tokayev spoke about the country’s climate change policy and its importance in the light of the upcoming COP 26 UN Climate Change Conference in Glasgow.

“Access to green financing and green technologies will be critical in its implementation, and we look forward to partnering with the countries you represent, including the United Arab Emirates, Switzerland, Ireland, New Zealand and Norway,” the President said.

Kazakhstan is also committed to greening and sustainably developing the agricultural sector.

In terms of security issues, conflict prevention and sustaining peace in Asia is also a priority.

Tokayev called on the new Afghan authorities “to honor their commitments to prevent any spillover of militancy, drug smuggling and uncontrolled migration beyond Afghan borders.”

The President also said that Kazakhstan will dispatch 5,000 tons of wheat flour worth $2.5 million as humanitarian aid to the Afghan people. The aid will be continuously provided to Afghanistan, he said.

In early September, it was reported that Kazakhstan extended study visas for Afghan students, provided air transit corridors and refueling facilities for aircraft with foreign nationals on board. Almaty was chosen as a temporary location for the UN agencies in Afghanistan.

Tokayev said that Kazakhstan stands ready “to further enhance the friendly ties with the countries both in bilateral and multilateral dimensions.” He emphasized that Kazakhstan is known for its domestic stability, effective unity-in-diversity model, dynamic economic growth and well-balanced foreign policy.