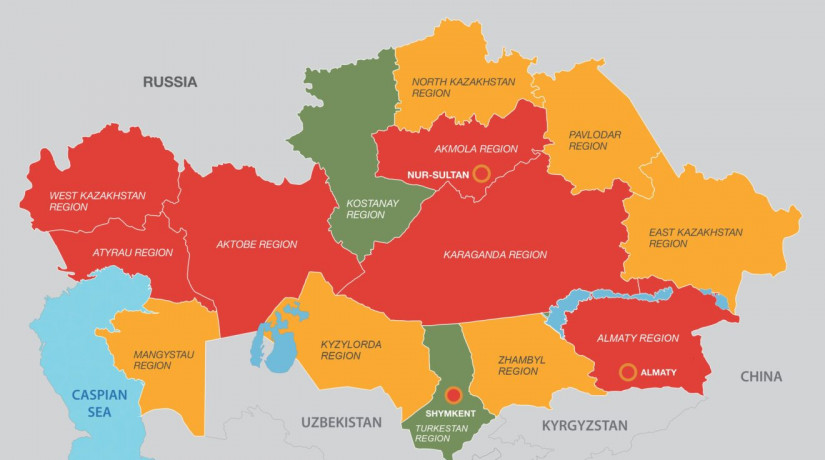 “In April, the epidemiological situation has deteriorated, so since the beginning of April 29,200 cases have been registered. Compared to the same period in March, there has been an increase in the incidence rate by 2.8 times. Up to 2,800 patients per day are being registered. An increase of morbidity has been noted in all regions, except Kostanai,North KazakhstanandPavlodarregions,” said Shoranov.

In the red zone are Nur-Sultan, Almaty, Shymkent and Atyrau, as well as the Aktobe, Akmola, Almaty,West KazakhstanandKaragandaregions.

As of April,Kazakhstanhad 281,351 coronavirus cases and 51,695 coronavirus pneumonia cases. Over the past day, the nation registered 2,657 cases.

Shoranov said 60 percent of all cases in the country accounts for the city ofNur-Sultanand Almaty and the Almaty Region.

Kazakh capital Nur-Sultan has been in the red zone for a month now and the cases are on the rise from 300 to 650 daily cases. Over the past week, the number of cases increased by 19 percent.

The adult population is most vulnerable to the infection accounting for 79.6 percent of new cases, followed by children – 17.6 percent and teenagers – 2.8 percent.

Officials explained the surge in cases with noncompliance of city residents with sanitary regulations, including visits to crowded places and not wearing masks.

576,459 citizens have so far received at least one dose of the vaccine –Russia’s Sputnik V being produced at the Karaganda-based pharmaceutical plant.

Since the beginning of April, more than 923,000 doses of Sputnik V vaccine have been delivered to the regions and an additional 910,000 doses are expected to be delivered until the end of the month.

Shoranov also said 500,000 doses of other vaccine producers are expected, though he did not specify which ones.