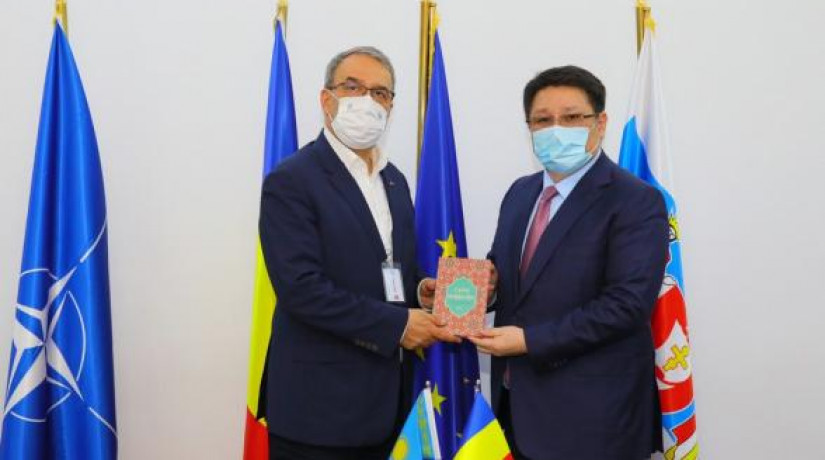 Almaty. March 4. Information Center - Constanta Mayor Vergil Chitac and ambassador of the Republic of Kazakhstan to Romania, Nurbakh Rustemov, met on Tuesday to discuss, among others, a potential cooperation agreement between the port of Constanta and the Caspian Sea port of Aktau, the local administration said in a release, Actmedia.eu reports.
The initiative envisages, among others, the mutual showcasing of cultural personalities, like for instance placing a bust ofRomania's national poet Mihai Eminescu in a relevant public place in Aktau and, by reciprocity, a bust of Kazakh composer, instrumentalist and folk artist Kurmangazy Sagyrbaev in the city ofConstanta.
"Several topics of interest were discussed during the meeting regarding the development of bilateral cooperation betweenConstantaand similar cities inKazakhstan, taking into account the fact that this country is an important trading partner forRomaniainCentral Asia. The Kazakh ambassador expressed the readiness of the City Hall of Aktau, a port on the Caspian Sea, to establish cooperation relations with the city of Constanta," the release of the Constanta City Hall states.
The parties agreed to initiate the procedure for establishing cooperation relations between the two port cities,Constantaand Aktau.
"Negotiating and signing a cooperation document between the two cities would allow them to develop economic, academic and cultural exchanges and facilitate mutual investment, especially in view of the very good relations between the respective port authorities and of the large-scale activities conducted by Rompetrol (the main brand of KMG International, the group owned by Kazakhstan's national oil and gas company KazMunayGas) in Constanta County," the statement said.
According to the municipality, several events are slated for2021 inRomaniaandKazakhstan, meant to mark the good bilateral cultural relations. Thus, a group of artists from the National Academic Orchestra of Kazakhstan will give concerts at the Bucharest National Opera House and the University of Music, to celebrate the Nauryz holiday (Persian New Year) between March 21 - 23.
The ambassador ofKazakhstanadvocated stepping up the cultural collaboration betweenRomaniaandKazakhstan, requesting in this sense support for the development of similar cultural events inConstanta.
The Mayor of Constanta highlighted the benefits ofKazakhstan's investment programs inConstantaand expressed hope that significant investment programs will be identified and carried out in the municipality in the next period, directly or through existing mutual funds at national level - mainly through the Kazakh - Romanian Energy Investment Fund.
Ambassador of theRepublicofKazakhstan, Nurbakh Rustemov, was accompanied on the visit toConstantaby deputy head of the diplomatic mission, Kayrat Karabayev, consul and attaché Azamat Kagenov, and by Kazahstan's honorary consul inConstanta, Erghin Hagicalil.